Yesterday, for the first time in thirty seven years, a human-made object landed softly on the surface of the Moon. It struck me to discover we’ve been away from the moon for so long, but the last soft landing was that of Luna 24, last soviet lunar mission, in 1976. For the first time, China managed to softly land a probe, Chang’e-3, on the Moon, and deploy a small rover a few hours later. 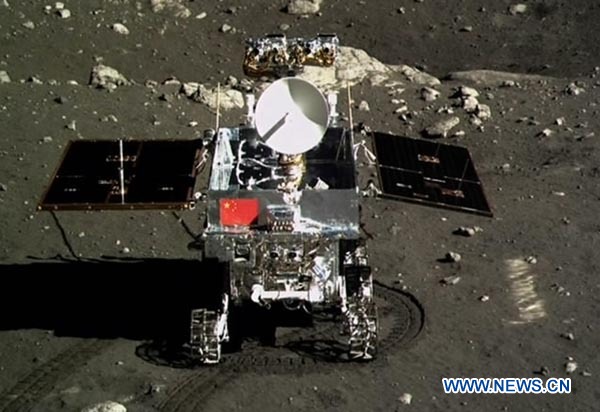 In the last year, I’ve heard people worrying about China’s Space Program. “It’s not a democracy”. “Their only purpose is to send missiles at us”. This always make me feel sad. I am not fond at all of China’s politics, but I think science achievements shouldn’t be regarded as the result of a country’s effort only. Those achievement are for the benefit of the whole mankind. Yes, the lander that touched down yesterday didn’t have US flags printed on the walls. But it’s not necessarily a bad thing.

I was glad to see anther country achieve a major Space goal, as I was glad when the news came that India’s first Mars spacecraft successfully went into transfer orbit. I’m glad to see that, even if NASA is struggling with budget issues and cancels programs by the day, human exploration of space goes on.

I think it’s time we stopped looking at countries as separate entities, doing things by themselves, competing with each other. The USA were able to fund the Apollo program because the Space Race and the Cold War justified the billions of dollars need to get there. Kennedy’s We choose to go to the Moon speech, however symbolic it can be, denotes quite well the period’s climate: even though he talks about peace during the whole speech, he emphasises the power of the United States, and the need to be better than the other side. If you want peace, prepare for war. Now that those are over, the world will need to pools its resources if we want to go beyond our pale blue dot’s backyard that is the moon.

So for a minute, let’s just rejoice that mankind is capable of those beautiful achievements, and stare in awe at the first photographs from the surface of the moon since 1976.